When in Doubt, Use the Super Phantom

When in Doubt, Use the Super Phantom

This week I skied with a skier who was close to parallel, but not ready for off-piste skiing. The key to the next level in skiing is transition, transition, transition. It is easy to see when skiers are not yet ready for all-mountain skiing by watching their transition. You can follow them closely and view the skis at the beginning of transition. Although it maybe obvious to the viewer that the first movement of the transition is a separation of the skis, beginning with the old free or inside ski foot, unfortunately the skier is rarely aware of this behavior.

The vulnerable point for any turn is just before the transition, when the skis are just about to reduce angle. For some skiers the problem may already begin during the arc of the turn, with a lazy free foot not tipping enough through the whole turn. If the free foot lacks adequate tipping angles during the turn it will be almost flat at the bottom of the turn, at transition. In this situation the skier cannot transfer balance to the little-toe edge of the new stance ski, as the ski is already almost flat on the snow prior to transition.

A transition from turn to turn requires tipping or rolling edges; this movement creates energy for the transition. This is not an overnight revelation; I have been talking about it for years. So what is the solution for the lazy inside little toe edge?

The Super Phantom, which appears in the “Expert Skier 2” book and DVD. The Super Phantom was created especially for the skier who wants to transition with parallel skis and move to all-mountain skiing.

Start of the Super Phantom

• Begin by traversing a slope and pick up the stance ski, finishing the traverse on the little toe edge of the uphill foot.
• Again, practice this until you can perform the traverse perfectly, the whole way across the slope.
• Now traverse the slope balancing on the uphill little toe edge and lift the lower foot and touch its ski to the uphill boot.
• Practice this until you can lift and touch the lower ski to uphill boot at least five times in the traverse, without losing your balance and without diminishing the grip of the uphill, little-toe edge. 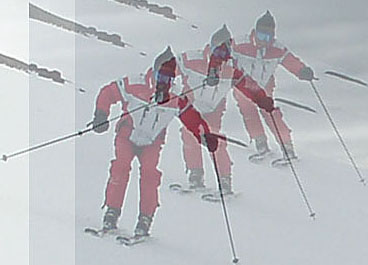 The Super Phantom is designed to create a breakthrough for skiers who are always stemming into the new turn. Stemming constitutes a breakdown of proper technique for all types of advanced and expert skiing. Watch skiers on the slope and you will begin to realize how few skiers are actually skiing correctly. Without a Super Phantom you are not really skiing with PMTS technique. 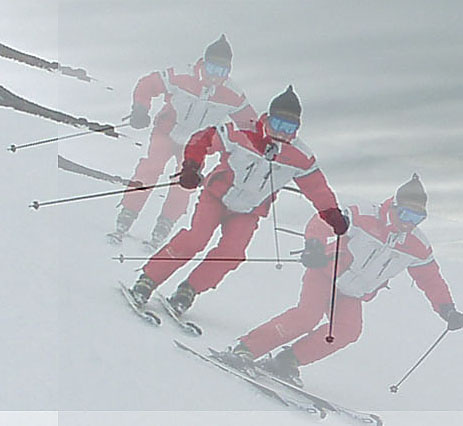 Now you have the formula for successful PMTS skiing. You can practice this formula and exercise every time you ski. Have a friend or family member video your progress right from the beginning, right from the one-ski traverses on the uphill, little-toe edge, so you can watch and be aware of your progress.

Good luck: a real Phantom Move is just around the corner!